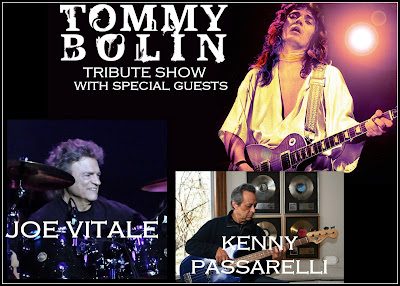 WELCOME to a very special edition of The Ray Shasho Show. Today we Honor & Remember ‘The Life & Music’ of legendary guitarist, singer and songwriter TOMMY BOLIN. And to help us relive those incredible and historic events… We will feature three very special guests … Joe Vitale, Kenny Passarelli and Trace Keane.  But first here is a little background about Tommy Bolin and our special guests …
Tommy Bolin was born in Sioux City, Iowa and began playing in bands around the city as a youth before moving to Boulder, Colorado in his late teens. He played with American Standard before joining Ethereal Zephyr, named after a train that ran between Denver and Chicago. When record companies became interested, the name was shortened to Zephyr. The band featured Tommy on guitar, David Givens (bass), and Givens' wife Candy (vocals). They produced two albums with Tommy and began performing larger venues, opening for more established acts such as Led Zeppelin. 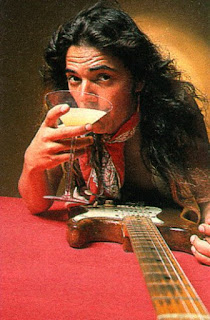 In 1972 Tommy, aged 20, formed Energy, a fusion jazz-rock-blues band which featured Stan Sheldon (bass), Bobby Berge (drums), Tom Stevenson (keyboards) and Jeff Cook (vocals) who shared writing credits with Tommy over throughout his career. While the band never released an album during his lifetime, several recordings have been released posthumously. Around this period, he was invited to play on Billy Cobham's (ex Mahavishnu Orchestra) highly acclaimed Spectrum album (1973), with Tommy on guitar, Cobham (drums), Leland Sklar (bass) and Jan Hammer (keyboards). The album allowed Tommy to reach a far wider audience, and to this day, is considered one of his career highs. Jeff Beck reportedly was so impressed, he went down a similar path – ‘Stratus’ is a regular on his current concert set list. Of note, ‘Stratus’ was also sampled by Massive Attack on their 1991 track, ‘Safe from Harm’.Reportedly, at Joe Walsh's recommendation, Tommy joined the James Gang in 1973. He recorded two albums, Bang! in 1973 and Miami in 1974.Tommy signed with Nemperor Records to record ‘Teaser’, his 1975 debut solo album. Musicians included; David Foster, David Sanborn, Jan Hammer, Stanley Sheldon, Phil Collins and Glenn Hughes. While recording Teaser, he was contacted to replace Ritchie Blackmore in Deep Purple. 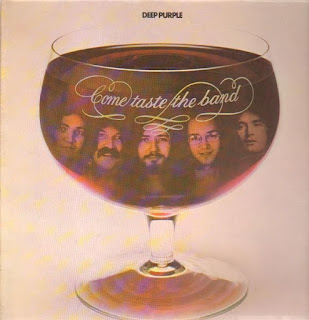 A year earlier Blackmore had mentioned in an interview that Tommy was ‘the only American guitarist worth listening to’. But, it was apparently on the recommendation of David Coverdale – Purple's then current vocalist, that he was invited to audition for the band in July 1975. The job was immediately his. Contracts were quickly drawn up between managements allowing Tommy to continue his solo career during Purple's downtime. The band relocated to Munich to begin work on a new album. ‘Come Taste the Band’ was released in late 1975 (around the same time of the release of ‘Teaser’) with Tommy writing or co-writing seven of the album's nine tracks.– the group disbanded in March 1976. Tommy returned to the States to record his second solo album, Private Eyes, released September 1976. He then went on the road to promote the album with a rotating cast of players which included Narada Michael Walden, Mark Stein, Norma Jean Bell, Reggie McBride and Jimmy Haslip. The tour, which saw him opening for Peter Frampton and Jeff Beck, proved to be his last. His last performance was at the Jai Alai stadium in Miami December 3, 1976 where he opened for Beck. Ironically his last song was ‘Post Toastee’ – a song warning of the dangers of addiction. A day later, Tommy was pronounced dead from a drug overdose. He is buried in Calvary Cemetery, Sioux City, Iowa … Tommy Bolin was only 25 years old.
Joining us today to help share the life and music of Tommy Bolin is …
JOE VITALE
Joe Vitale is a veteran musician and drummer whose career has spanned over forty years of touring, recording, song writing, and producing with legendary and Rock ‘N Roll Hall of Fame artists.  Along with vocals, he also plays percussion, keyboards and flute.  His drumming encompasses all styles of music.  A dedicated professional, his quality of performance is evident in his resume. 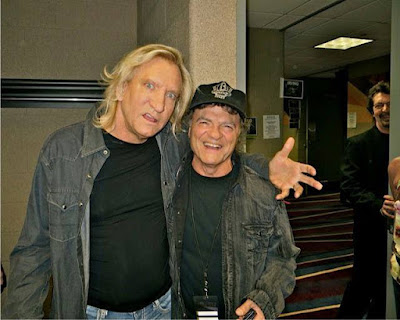 He has recorded and toured with Ted Nugent, Joe Walsh, Dan Fogelberg, Peter Frampton, The Eagles, Crosby, Stills and Nash, and CSNY to name a few.  In addition, he has recorded with Rick Derringer, Ringo Starr, John Lennon, Keith Richards, Bill Wyman, Ronnie Wood, Van Morrison, Carl Wilson, Don Felder, Boz Scaggs, John Entwhistle and many others.
Joe Vitale’s songs & performances have appeared in many movies & TV: Spy Games, Joe Dirt, the 40-Year-Old Virgin, The Warriors, Devil’s Rejects, Beverly Hillbillies, History of the Eagles, Fringe, that 70’s Show, just to name a few.
Vitale has also co-produced albums for Joe Walsh, Stephen Stills, CSN & CSNY.  His many songwriting credits include the classic Joe Walsh song, “Rocky Mountain Way,” and also, “Pretty Maids All in a Row,” from The Eagles classic album, “Hotel California,” both co-written with Joe Walsh.
He has three solo albums, “Roller Coaster Weekend,” “Plantation Harbor,” and “Speaking in Drums,” and a book, “Back Stage Pass,” about his career in music. He’s also produced his son, Joe Jr.’s, first album, “Dancing with Shadows.”
In 2010 and 2011 Joe played drums for the historic “Buffalo Springfield Reunion”


Joe continues to tour, record, write and produce. He's also added to his resume, counselor and music director at Rock & Roll Fantasy Camp. Visit www.joevitaleondrums.com for more information
ALSO ON THE SHOW IS KENNY PASSARELLI
Kenny was born in Denver, Colorado … A meeting with Stephen Stills changed his life forever.  Kenny was impressed by Stills, and who wouldn’t be?  Crosby, Stills, Nash and Young was producing some of the most amazing music.  Kenny recalls this introduction, “I was introduced to a guy that owned a local music store that knew Stephen Stills.  He took me up to Goldhill, which was a place in Colorado that Stephen spent a lot of time.”  Stills took a liking to Kenny and played him some tracks that Stills had been working on.  Stills then played Kenny a rough version of Carry On, and Kenny was simply blown away.
Shortly thereafter, Kenny was slated to join Stills at Woodstock, but a bout with hepatitis ended his dreams with sudden swiftness. In the summer of 1971, Kenny got his first big break.  >He received an invitation from Joe Walsh to join Barnstorm.  Kenny recalls that Joe was the person responsible for his getting involved with the fretless. Joe received one of the very first fretless P-Basses and gave it to Kenny.  Though intimidated at first, Kenny eventually made it his trademark, and started to get a great deal of session work because of it.  Kenny worked with some of the best … Russ Kunkel, Joe Vitale, Dan Fogelberg and so many others from that memorable period.  Things hit a high point when Kenny co-wrote the classic track Rocky Mountain Way with Joe Walsh. 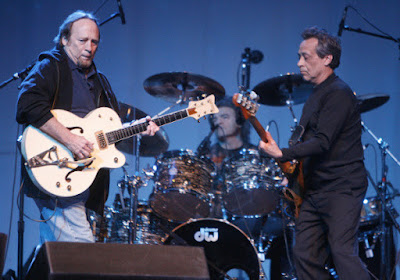 Kenny’s biggest break came when Joe Walsh recommended him to Elton John, who was in need of a new bassist.  Elton flew Kenny to Paris, where he auditioned.  Kenny remembers, “I really didn’t know a whole lot of Elton’s music.  When I auditioned, it was just the two of us.  I was intimidated the whole time, but he was impressed by some of the people that I recorded with.  In 1976, Elton recorded his double album entitled Blue Moves.  Kenny saw that the music on this album was much more difficult, so he put down his fretless P-Bass, and cut all the tracks on an Alembic Bass, obviously one of the earliest models. When Elton toured in support of Blue Moves, Kenny kept playing his Alembic.
During a week of sold out shows at Madison Square Garden, Elton informed his band that that was his last tour for a while.  Kenny recalls that Elton was very gracious and generous with the band.  When Elton stopped touring, Elton’s entire band became the backup band for the up and coming duo Hall and Oates.
He recorded Along the Red Ledge, and the live LP entitled Livetime.  In time, Kenny left Hall and Oates and started touring with Dan Fogelberg.  In 1983, Kenny finally got his chance to play with Crosby, Stills and Nash, but it was a bittersweet experience.  Kenny was dissatisfied with the band’s new sound.   In addition, Kenny was starting to get burnt out from all of the touring.  By the mid 1980’s Kenny decided to stop touring.  This period lasted well into the mid 1990’s. 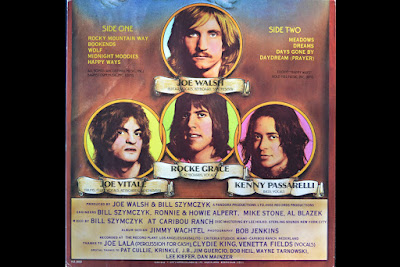 During this 10-year period, Kenny reinvented himself, getting back into playing the piano, and composing his brand of music which he calls “Contemporary Classical Music.”  His recent CDs include Twelve Twelve and Miracle of Tepeyak.  He now makes New Mexico his home and is playing quite a bit these days.  He produces and tours with Otis Taylor, a blues guitarist that Kenny really believes in, and he recently played a show with his old pal Stephen Stills.
Visit www.kennypassarelli.com for more information
ALSO JOINING US IS TRACE KEANE Trace has been working with Johnnie Bolin on The Tommy Bolin Archives for the last 13 years. He’s a Staff writer for Hush Music Magazine (Spain), the Spanish Deep Purple Fanzine since 2009.He does media work for a variety of musicians, Kenny Passarelli, Mark Andes, Joe Vitale, Johnnie Bolin, Russell Bizzett.
Trace has worked with dozens of radio stations and programs about life and music of Tommy Bolin. He started working on The Tommy Bolin Festival when it was in very bad shape and has since gotten the attendance to escalate. The Festival runs this year from Aug. 1 (Tommy's birthday) to Saturday Aug.4 in Sioux City, iowa.
For more details consult the Tommy Bolin Archives website tommybolin.com

Posted by THE RAY SHASHO SHOW at 1:27 AM