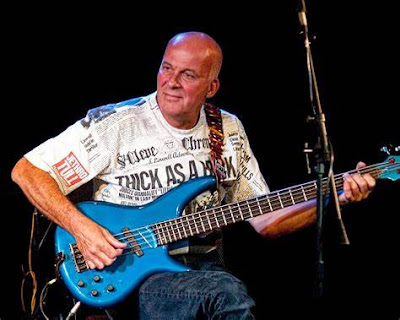 Dave Pegg joined Fairport Convention in 1969.
As a teenager, Dave became involved in Birmingham's vibrant 60s rock scene. He soon found himself playing guitar most evenings with one or other of the city's young bands. Later, Dave auditioned as a lead guitarist with The Uglys but was persuaded to swap to bass guitar and has played the instrument ever since. 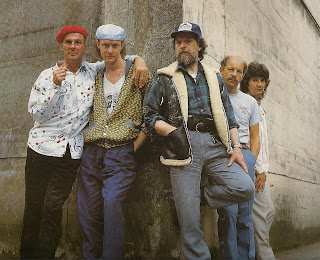 After a spell with The Uglys, Dave joined the Ian Campbell Folk Group on double bass and met fiddle maestro Dave Swarbrick by whom he was introduced to Fairport Convention. He joined them and has been in the band ever since.
In 1980, he joined Jethro Tull as bass player and spent 15 years with the band. As if playing in two bands was not enough, he set up Woodworm Records to produce and market Fairport's albums. He also recorded a solo album.
Dave has also co-organized Fairport's Cropredy festival since the early 1980s. From small beginnings, it has grown into a major event that attracts 20,000 fans each August. 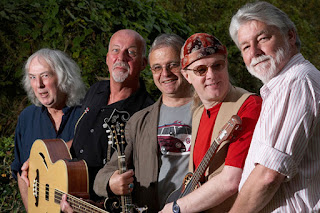 As well as recording and touring with Fairport Convention and Jethro Tull, Dave is much in demand as a session player and has contributed bass to innumerable recordings. He is also an accomplished mandolin player. 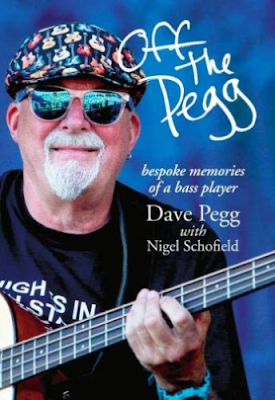 at amazon.com
Dave Pegg (or Peggy as he is known to friends and fans worldwide) is almost as admired as a teller of tales as he is as a bass player: and as a bass player, he is held in awe by friends, fans and fellow musicians. For years people have been saying he should turn his tales into a permanent record. “Write a book, Peggy”, they yelled. Now (with a little help from his friend and Fairport biographer Nigel Schofield) he finally has. In his own words it’s all here: the thriving Brum music scene of the sixties; trad folk with The Campbells; Fairport, Tull, the Dylan Project; countless sessions; gigs from front rooms to the world’s most celebrated stages; running his own recording studio and record label; homes from Sutton to Little Hadham to rural Oxfordshire to even more rural Brittany; an annual gathering that began as a village fete, became a reunion and is now one of the world’s most respected festivals. There’s also friends and fellow musicians, including some of the biggest names in the music business (Off the Pegg features a detailed and complete index so you can find them easily!) 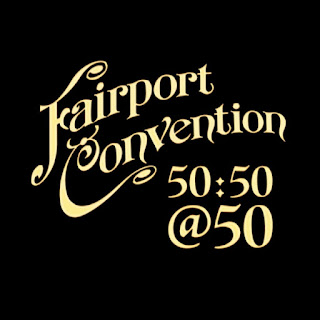 Limited vinyl LP pressing. Fairport Convention, the UK's most influential folk-rock band, celebrates it's 50th anniversary with 50:50@50. Half the fourteen tracks were recorded at recent concerts and half in the studio. With nine compositions by members of Fairport, the album presents a mix of brand new songs and favorites from Fairport's repertoire. Two tracks feature guest lead vocals: one from Robert Plant and one from Pentangle's Jacqui McShee.

Rehabilitation for Jerry Donahue –
Jerry Donahue is an American guitarist and producer primarily known for his work in the British folk rock scene as a member of Fotheringay and Fairport Convention as well as being a member of the rock guitar trio The Hellecasters.

Lot 191 of 467:
JHS Vintage Reissued Series V58JD Jerry Donahue signature electric guitar, ser. no. M201706254, bearing the autographs of some of the greatest musical artists of our generation, including: Robert Plant, Jimmy Page, John Paul Jones, Paul McCartney, Mark Knopfler, Tony Iommi, Pete Townshend, David Gilmour, Eric Clapton, Jeff Beck, Albert Lee, Jeff Lynne, Brian Wilson, Al Jardine, Blondie Chaplin, Steve Winwood, Dave Pegg, Richard Thompson, Joe Brown, Andy Fairweather-Lowe, Martin Barre, Al Stewart, Richard Digance and Ralph McTell
Jerry Donahue - born 24th September 1946 in Manhattan, New York, is an American guitarist renown for his work with Fairport Convention, Fotheringay and The Hellecasters, later touring with artists such as Joan Armatrading, Robert Plant, Elton John, Cliff Richard, Chris Rea, Hank Marvin, Roy Orbison, The Beach Boys and The Yardbirds to name a few. His prolific career has resulted in him becoming one of the worlds most respected guitarist and always wielding a Telecaster inspired guitar has held endorsements from Fender, Peavey, Fret King and JHS Vintage. On 29th July 2016, Jerry suffered a severe stroke, tragically rendering a diagnosis that he may never be able to play the guitar again. The sale of this guitar is to assist funding for Jerry's rehabilitation with an aim to bring him as far back to his normal self as possible. Kindly donated by JHS Vintage Guitars, the V58JD guitar has been autographed by some of the greatest and iconic musicians known to our generation, all of whom were delighted to rally round to help the cause. A special thank you goes out to Matt Worley and Tony Kelsey, who have spent hours and put in the miles obtaining the autographs and of course JHS Vintage for donating the guitar and all of the artists involved. A selection of images of some of the artists signing the guitar are available. The guitar is housed within a hard case, which has also been signed by further artists, fellow band members of the past, colleagues, friends and those who have been instrumental in making this happen.

For those who wish to donate to Jerry's Sweet Relief fund, they can do so via the following link: https://sweetrelief.org/jerry-donahue-fund/

Posted by THE RAY SHASHO SHOW at 9:17 PM